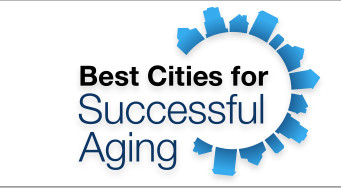 The Milken Institute released its “Best Cities for Successful Aging” report this week, with major nods to Austin and AustinUP. Take a look at page 18 of the report to see Austin listed #6 in the Top 20 Large Metros. Then scroll down to page 47 to see AustinUP included in a list of “Programs with Purpose.” We are proud to be included in this report and very proud of our work to make Austin one of the best cities for successful aging.  Full press release below.

LOS ANGELES, 3.14.17—This week, the Milken Institute released the third edition of its “Best Cities for Successful Aging” report and index, a collaboration between the Institute’s Center for the Future of Aging and its Research Department. The report evaluates 381 U.S. metropolitan areas to determine how well they serve the needs of the nation’s growing population of mature adults, enabling them to age productively, securely, and in optimal health.

The top 10 large and small metropolitan areas for 2017 are:

More than 80 percent of Americans age 65-plus live in metropolitan areas,1 and nearly 90 percent of older adults in the U.S. want to age in their homes and communities.2 Thus, the “Best Cities for Successful Aging” index is not intended to identify the locales to which older adults should retire. Instead, the index and report are designed to highlight the nation’s most livable metropolitan areas—those that enable an optimal quality of life for their aging citizens. “Cities are on the front lines of the largest demographic shift in history,” said Paul Irving, Chairman of the Center for the Future of Aging. “Lifespans are extending into eight, nine, and ten decades, and older adults increasingly are seeking lifelong engagement and purpose. They expect their cities and communities to support their changing needs.”

The Mayor’s Pledge:
Recognizing the pivotal role of mayors and other local government officials in championing a supportive environment for an aging population, the Milken Institute Center for the Future of Aging in 2014 launched The Mayor’s Pledge. Since its inception, nearly 200 mayors across the United States have joined this movement for purposeful, healthy aging and committed to making their cities work better for older residents. View the list of pledging mayors.

Programs With Purpose:
In addition, the Milken Institute canvassed the country to discover programs and projects spearheaded by nonprofit organizations, public agencies, and businesses that engage older adults and bring positive change to their lives and communities. The Programs With Purpose detailed in the new edition of the report represent a few of the initiatives that serve as examples for others to emulate. AustinUP is included on the list of Programs with Purpose. See page 47 of the report.

“The policies, programs, and features that we highlight in ‘Best Cities for Successful Aging’ are not just important for older adults,” said Irving. “Throughout our lives, we seek meaning and purpose. A vibrant economy, efficient transportation, effective health services, learning opportunities, and accessible housing enable all individuals and communities to prosper.”

About the Milken Institute
The Milken Institute is a nonprofit, nonpartisan think tank determined to increase global prosperity by advancing collaborative solutions that widen access to capital, create jobs and improve health. It does this through independent, data-driven research, action-oriented meetings and meaningful policy initiatives.